Edgar allan poe the pit and the pendulum

The Pit and the Pendulum by Edgar Allan Poe

At age twelve I was given my first introduction to the world of literature by my mother who read me Poe’s The Pit and the Pendulum. I can still vividly recollect living through the horrors of the chamber with the unnamed narrator, wondering why Christian monks would construct such a room and why Christian monks would inflict such torture. I still wrestle with a number of the story’s themes.

SADISM
Why do such a thing? The story’s torture chamber is not a makeshift construction slapped together; rather, with its pendulum descending in mathematical precision and its collapsing metal walls turning red hot, to assemble such a bizarre, intricate room would take sophisticated engineering, huge resources and lots of time, perhaps years. What does such a room say about the Western monastic tradition and the mentality of monks?

In The Distant Mirror, The Calamitous 14th Century author Barbara W. Tuchman richly portrays the psychology of these chaotic, disorderly times. For example, she writes, “In village games, players with hands tied behind them competed to kill a cat nailed to a post by battering it to death with their heads, at the risk of cheeks ripped open or eyes scratched out by the frantic animal’s claws. Trumpets enhanced the excitement. Or a pig enclosed in a wide pen was chased by men with clubs to the laughter of spectators as he ran squealing from the blows until beaten lifeless. Accustomed in their own lives to physical hardship and injury, medieval men and women were not necessarily repelled by the spectacle of pain but rather enjoyed it. It may be that the untender medieval infancy produced adults who valued others no more than they had been valued in their own formative years.”

Nowadays, we have a name for “untender infancy”: child abuse. We also have a word for enjoying the spectacle of pain inflicted on others: sadism. Of course, the effects of child abuse and living in a society accepting sadism as the norm would not disappear when men became monks. What undoubtedly added fuel to this psychological fire was a religion and theology giving a central place to guilt and sin and thus turning men against their own bodies and, more specifically, again their own sexuality.

Reaching absolute conclusions about the mindset of peoples living centuries ago can never be an exact science, but it doesn’t take too much imagination to understand how such a life in such a time would produce a population of dark, twisted people. Poe’s tale takes place in 1820s not the 1350s, but how much did the psychology of the monasteries really change in these years?

ALTERED STATES OF CONSCIOUSNESS
In the beginning stages of the narrator’s ordeal, he conveys the following, “Very suddenly there came back to my soul motion and sound – the tumultuous motion of the heart, and, in my ears, the sound of its beating. Then a pause in which all is blank. Then again sound, and motion and touch – a tingling sensation pervading my frame. Then the mere consciousness of existence, without thought – a condition which lasted long.”

Teachers within the various yoga and Buddhist traditions talk about the consciousness of existence, without thought, that is, the gap between thoughts. In such a gap between thoughts we are given a glimpse of the ground of being, pure awareness of space. This awareness can be developed through meditation or occasionally experienced through such things as hallucinogens, trance, or, as with the narrator of Poe’s tale, extreme emotional states.

FEAR
Adding to the fear of actual physical suffering, there is the fear we project with our minds and imaginations. The narrator’s imagination is afire: “And now, as I still continued to step cautiously onward, there came thronging upon my recollection a thousand vague rumors of the horrors of Toledo. Of the dungeons there had been strange things narrated – fables I had always deemed them – but yet strange and too ghastly to repeat, save in a whisper. Was I left to perish of starvation in this subterranean world of darkness; or what fate, perhaps even more fearful, awaited me?” Fear thrives on our projecting into the future: whatever pain or agony we are currently experiencing, there is always the ever-present possibility our plight will become worse.

HOPE AND GOOD FORTUNE
The narrator is forever hopeful and it’s the narrator’s hope coupled with his fear and sufferings that gives the tale its emotional depth and breath. And, as it turns out, good fortune or what we more commonly call ‘luck’ follows the narrator at three critical junctures in the tale. Oh, Fortuna, if we could all have such good fortune and luck at critical points in our own lives! 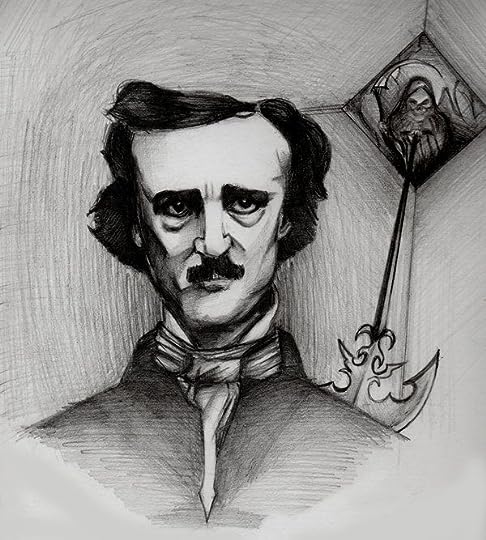 The Pit and the Pendulum - Edgar Allan Poe.

"The Pit and the Pendulum" is a short story written by Edgar Allan Poe and first published in in the literary annual The Gift: A Christmas and New Year's.
Edgar Allan Poe

The Pit and the Pendulum

As the story begins, our narrator is being sentenced to death by a panel of black-robed, pale-faced judges. Things aren't looking good: especially because he mentions that these guys are inquisitors. That means our story takes places during the Spanish Inquisition. And let's just say that during the Inquisition, sentenced to death means sentenced to horrible, painful, and super-torturous death. Quick side note: the story is narrated in the past tense, which means he's telling us all this after it's already happened.

Front cover of a comic book adaptation of "The Pit and the Pendulum' from Marvel comics with an issue date of January 1, The action takes places in the Spanish city of Toledo at an unspecified point in the past when the Spanish Inquisition was active. The unnamed narrator has been sentenced to death by the Inquisition but finds that he is not to die in a public execution. The Inquisitors originally intend for the narrator to act as his own executioner by tricking him into falling down a deep pit in his dark cell. After he manages to avoid that fate, he finds himself strapped to a table while a pendulum with a sharp metal edge descends from the ceiling very slowly, taking several days to get near to him. There have been several film adaptations of "The Pit and the Pendulum", however, most of those adaptations have been very loose.

The story is about the torments endured by a prisoner of the Spanish Inquisition , though Poe skews historical facts. The narrator of the story describes his experience of being tortured.

An unnamed narrator opens the story by revealing that he has been sentenced to death during the time of the Inquisition—an institution of the Catholic government in fifteenth- and sixteenth-century Spain that persecuted all Protestants and heretical Catholics. Upon receiving his death sentence, the narrator swoons, losing consciousness. When he wakes, he faces complete darkness. He is afraid that he has been locked in a tomb, but he gets up and walks a few paces. This mobility then leads him to surmise that he is not in a tomb, but perhaps in one of the dungeons at Toledo, an infamous Inquisition prison. He decides to explore.

The Pit and the Pendulum , Gothic horror story by Edgar Allan Poe , first published in The Gift an annual giftbook of occasional verse and stories in Sentenced to death by the Spanish Inquisition , the imprisoned narrator finds himself in absolute darkness, in danger of falling to his death into a pit in the centre of the cell. After narrowly escaping the razor-edged blade of a swinging pendulum, he is forced toward the pit by the hot metal dungeon walls that are closing in. The Pit and the Pendulum. Article Media. Info Print Cite. Submit Feedback.

What makes the sky red at night

Running away from problems quotes

Greek and english bible side by side